Director Sebastian Junger and Producer Nick Quested went back through the unused footage of Restrepo to see if there were any aspects of combat that were yet to be mined.  The result of this search was the film Korengal, a deeper look into the psychology of the men who went to war.

Same men, same battle, same valley, different film. But how to expand upon the overwhelming acceptance and love that we garnered for Restrepo? How do we create a campaign that distinguishes us from a slew of feature films, where the emphasis is on a single heroic icon? 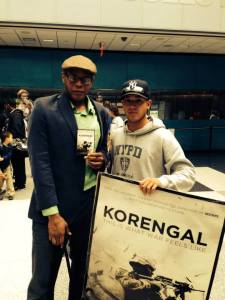 Mike Fabre of the 173rd in NYC introduced himself to our street team. He grew up with Doc Restrepo.

The difference?  We understood that at its essence, Korengal is about family. We needed to re-engage the very same audience who took Restrepo as their own. So we hit our databases, took to the phones, and contacted veterans groups and organizations across the country. Our partners included TAPS, Soldiers Angels, and the Defenders of Freedom. We generated local buzz for our premiere weekend in NYC, when team member and former US Army Sergeant Gabe Tolliver commanded a street team to drive people to the theater. Fortunately, it was also Fleet Week, and they were strategically posted throughout the area.

With our fundraising threshold crossed in a breathtaking 48 hours on Kickstarter, every effort had to deliver a maximum punch. In addition to a full press schedule,* we sent Sebastian where there was a strong veteran and military presence.  Los Angeles, Portland, Seattle, Austin, San Antonio, Ft Hood, Dallas, Denver, Chicago, DC, NYC, and to The Pentagon, US Army Heritage & Education Foundation Center, The National Infantry Museum at Ft Benning, US Military Academy (West Point), Walter Reed, Capitol Hill, and the prestigious Pritzker Military Library & Museum. Veterans, active duty, parents, military historians, politicians, film auteurs, therapists, and founders of organizations were just some of the people who flocked to see this follow-up film to Restrepo. 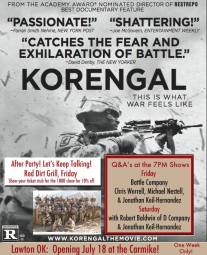 across the country. To ensure that there was a local connection, we reached out to veterans to do a Q&A at every city where it played. This required an extraordinary amount of outreach to local veterans, and coordination with the mTuckman Media, theater managers, and the PR teams who created the local ads. Graphics were created for each city, with the names of the special veterans, who would be on hand to relate their own experiences to the audience after the screening. Every veteran who spoke had served in combat in Afghanistan, Iraq, or both.

From Albuquerque to Boston, veterans were telling people in their communities about their combat experiences. Many veterans wrote to tell us that for many of them, the Q&A was the first time they’d talked about it in public. The result was national and regional press, along with high participation on our Restrepo and Korengal Facebook pages.  Tens of thousands of new supporters engaged with us.

Work on Korengal carried with it a responsibility to carry on in memory of the late Tim Hetherington. Two soldiers from Battle Company paid tribute to him at the Little Rock Film Festival. Sergeants Jason Mace and Michael Cunningham accepted the Arkansas Times Audience Award:

“First, we want to thank the Little Rock Film Festival crew for putting all of this together and bringing us out here and really showing us what Southern Hospitality means.  Next, we want to say that this is for all the service men and women who have served in the Korengal, because this is not just our story, it’s theirs as well.  42 American Soldiers lost their lives fighting in that valley, from units such as:

This is for EVERY soldier that never came home, for the parents, children, and loved ones who think of them daily.  It’s for those of us who are home, searching and finding purpose in our new lives.  It’s for the men and women who are still serving, and carrying out their missions with both grace and humility.  It’s for Sebastian Junger, our battle brother, for rallying even after Tim’s death in Libya.  Lastly, this is for Tim Hetherington, whose friendship changed our perspective in both our daily lives and our worldly views, whose spirit lifted us when we needed it, and for whose artistic vision still continues to move us daily. Thank you.”

With Korengal, we tapped into the community that was already there. We claimed and regained the sense of family that veterans so often miss, while kicking off a much-needed dialog about veterans in America.