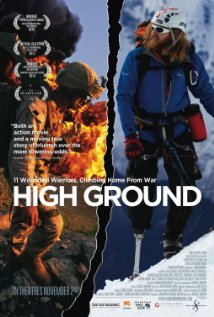 High Ground is beautiful, exciting, and inspirational film by Producer Don Hahn, and directed by adventure-filmmaker Michael Brown.  The film involved 11 wounded warriors and 1 Gold Star Mother who climbed Mt Lobuche in the Himalayas. Following the men and women from the training sessions in Colorado, to the ascent of the 20,000 ft mountain in Nepal, High Ground offered viewers a unique chance to see wounded warriors gain new mountaineering skills, while recalling their wartime experiences.

The goal of our outreach was to establish High Ground as a resource for wounded warriors, their families, and those who work with them.

We reached out to a large number of military and veteran support organizations. We partnered with dozens that focused on sports, outdoor recreation, service projects, yoga, and the arts for veterans and families.  We provided links to their sites on our website, so that veterans who watched our film would have a way to get involved with the activities they provide. 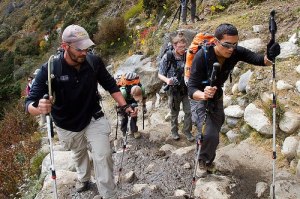 These organizations provided social media support, attendance at local screenings, and constant feedback when it came to building our community. In appreciation for their help, we prepared the High Ground Book of Quotes with photos, and feedback about the film from the organizations’ leaders. Two years, after its release, the film continues to have Facebook page dedicated to veterans.

In addition to being in theaters, High Ground opened the Heartland Film Festival, and played on Capitol Hill, and at the prestigious Pritzker Military Library and Museum. The film played for wounded warrior transition units, and theaters on military bases in the U.S., Hawaii, and Germany. High Ground also showed at museums, and universities for student veteran groups. In January 2014, the film, along with an introduction by Don Hahn, and a discussion with Michael Brown, kicked off the National Conference on Military Armed Forces (NCMAF)  .

Team High Ground went the distance for the military and veteran community because it’s the right thing to do. We prepared materials to help groups take on the challenges of a TUGG screening. Our guide described the different ways a veterans organization or a company could reach out to sell that minimum number of tickets.

High Ground provided a reminder to everyone, that the abilities of wounded warriors can exceed all expectations. It continues today to be a great source of inspiration to all those who see, and hear the veterans as they recount their war-time experiences, while making their way up a mountain.